Tracking a new year's resolution with F# and FSharpChart

This year, I have a goal of running 500 miles.  That’s not a crazy-ambitious goal, but between work, school, hobbies, friends, and (occasional) downtime, I think it’s plenty for me.  In contrast, the CEO of RunKeeper is planning to run 1,500 miles this year!  That’s an admirable goal, and I hope he succeeds (though I would prefer that he focus on releasing a Windows Phone app, instead.  Ah well…).

In order to stay motivated (and because it’s cool) I have decided to track my runs and chart my progress throughout the year.  Excel works just fine for this, but I want to try something a little different.  Why not use this as an opportunity to use FSharpChart?

My charts should show the following:

The run data themselves are kept in a simple text file, each line of which contains a date stamp and the number of miles I logged that day.  For now I am just updating this file manually, but I have plans to start populating it dynamically by pulling my run info from Endomondo (which has great Windows Phone and Windows 8 apps).  They don’t have a public API, but you can scrape your data from the HTML of their embeddable widgets.

My F# solution has 2 functions - one for grabbing my run data from a file (or wherever else I might want to grab them from), and one for generating the chart from the data: 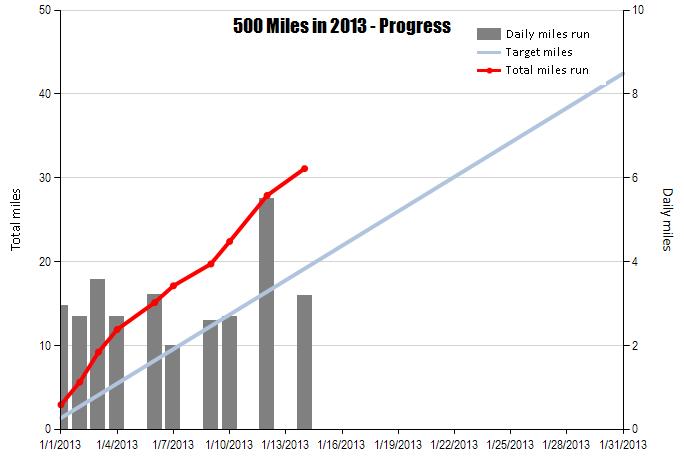 FSharpChart makes the chart generation pretty darn easy.  The code could even be quite a bit smaller, but I chose to add a lot of tweaks to colors, fonts, sizes, etc so that the output matched just what I wanted.

This will also scale the chart such that the time axis only runs up to the end of the month in which the last run is logged.  With only a handful of January runs, charting the entire year resulted in a bunch of empty space.

The resulting chart object can be saved as an image using the SaveChartAs method.  Then, using code from my previous blog entry, I can post the image and a quick status update to Twitter.

Expect to see quite a few of these guys over the course of the year!  Kudos to Carl Nolan for his work on FSharpChart.